This article presents a brief overview of the Tooth Gel of BIONET (BIYOVIS) Company, which showed high clinical efficacy in the treatment of patients with purulent-inflammatory diseases of soft tissues. The gel contains extracts of medicinal plants, enzymes, minerals and vitamins. 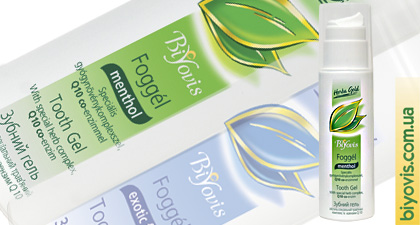 Currently used a number of drugs for the local treatment of wounds which do not have the necessary antimicrobial activity and do not provide pain medication, osmotic, decongestant effect. In addition, the structure of causative agents of purulent complications of wounds changed. Along with the traditional gram-positive and gram-negative aerobic microorganisms a significant share of anaerobic microorganisms, fungi. Association of aerobic and anaerobic bacteria in purulent post-traumatic wounds, pressure sores, patients with "diabetic foot" reaches to 98.8%. From 80 to 100% of the available strains sensitive to penicillin, cefazolin, tetracycline, kanamycin, gentamycin. The process of formation of resistance of microorganisms equally applies not only to the group of antibiotics, but traditional antiseptics and ointments. So, for example, solutions of furacillin, rivanola, 3% boric acid almost completely lost its antimicrobial activity against major pathogens of wound infection.

The course of wound healing can be divided into three main phases: phase I inflammation, phase II regeneration, III phase of formation and reorganization of the scar. The classification accurately reflects the main stages of a wound process and to determine the pathogenetically based treatment, respectively phase of wound healing.

Fresh wounds until full coverage of their granulation tissue is able to absorb toxins, products of disintegration of tissue, and the wound covered with granulation tissue, have virtually no suction power. In this regard, in the I phase of wound process, all medicines must have a high osmotic activity to provide intensive outflow of exudate from deep wounds, an antibacterial effect on the causative agents of infection, rejection and melting of necrotic tissue and evacuation of wound content.

In phase II of wound healing process, along with the suppression of remaining in a small amount of microbes or newly emerging strains through breach of asepsis and antisepsis in the time of the dressings, the drug should provide optimal conditions for the growth of granulation tissue.

In many cases, early operative closure of the wound is impossible without prior drug treatment. In such situations, the selection of important multicomponent drug, highly active against bacteria possessing active necrolytic effect of prolonged osmotic activity, or properties aimed at the prevention of drying of the wound surface to stimulate the growth of granulation tissue, promote the formation of epithelium.

Medicine used for local drug treatment have several disadvantages. Many medicines applied to the bandage in the form of solutions (hypertonic solution of sodium chloride, urea, furatsilina, dioksidina), 2-3 hours dry, inactivated by wound exudates. That is why the local application of solutions of various antimicrobial drugs and enzymes are ineffective. To prevent drying out of the bandage are widely used ointments containing various antibiotics or antiseptics, usually prepared with fat-lanoline-vaseline basis. However, due to the weak diffusion of drugs from fatty basis, the concentration of the antimicrobial component in wound tissues is small, does not reach the level of the minimal inhibitory concentration of microorganisms. In addition, the majority of traditional drugs have the unidirectionality of the action: only osmotic (hypertonic solutions, one-component sorbates), only anti-bacterial (antibiotics, antiseptics) or the necrolytic (enzymes). 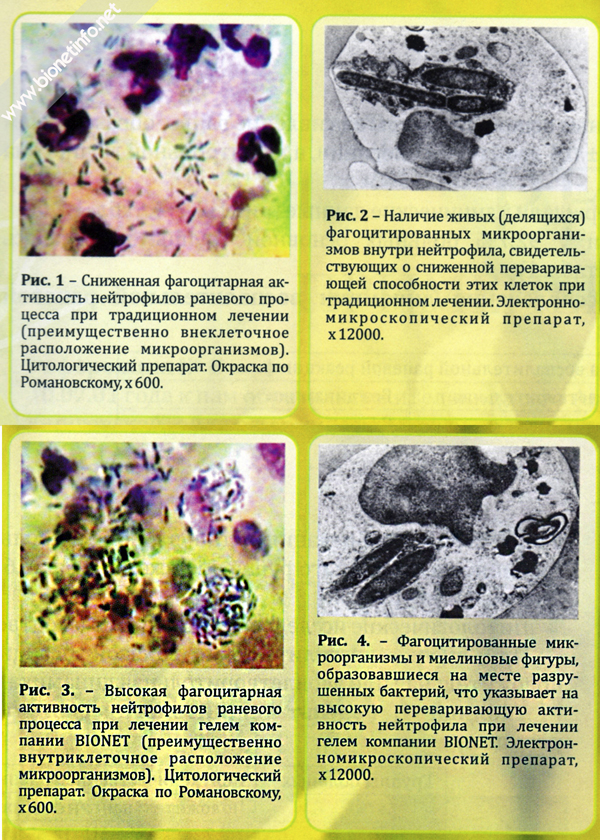 The Dental gel Biyovis has bactericidal and hemostatic effect, improves metabolic and reparative processes in tissues, which distinguishes it from traditional drugs and provides the multidirectionality of action.

In the analysis of local indicators of the wound process, we evaluated the inflammatory wound response and the phase of reparations, which included the emergence and full development of granulation tissue and beginning of the 3rd phase - the appearance of marginal epithelization.

An assessment of the dynamics of the inflammatory wound reaction was carried out according to 3 criteria. Positive (rapid subsidence of the inflammatory reaction of the wound, when the wound cleansing, occurred on the 4th day) was designated "+" sign. With satisfactory dynamics of (+/-) plaque and areas of coagulative necrosis persisted until the 5th day. The duration of the inflammatory response more than 5 days are regarded as unsatisfactory within the 1st phase of wound process (designated with "-"). The phase of reparations considered active in the case, when the first granulation appeared on the 3rd day, and their maximum simultaneously with boundary epithelization - on 6-7-th day. With the appearance of granulation in the 4-5th day, and their maximum number - on 8-9th day the repair was assessed as satisfactory (+/-). The appearance of granulation late 5th day, and their maximum number - later 9th day meant a slowdown in the 2nd phase (-).

Cytological study was evaluated the evolution of inflammatory wound reaction, the intensity of reparation and, in addition, microbial contamination of the wound surface.

Cytological study of the dynamics of the inflammatory reaction was evaluated as positive ( + ) is a rapid regression of inflammation, the active increase of dystrophic changes in cells, satisfactory (+/-) - with a slower decrease signs of inflammation and unsatisfactory ( - ) when the signs of inflammation persisted throughout the observation period. The intensity of reparations was estimated as active (+) - sequential appearance of cellular elements corresponding to the 2nd phase of wound process, satisfactory (+/-) - with a slower appearance of cytological signs of repair and slow - when it detects cellular signs of repair in the later stages and the sequence of their appearance. Low microbial contamination in wound prints are designated with the sign "+", moderate amounts of mixed microflora - a "+/-", detection of a large number of coccal flora or mixed - sign "-".

For electron-microscopic examination of a scraping of the wound surface were fixed in a 2.5% strength solution of glutaraldehyde in phosphate buffer (pH 7,2-7,4) and to fixed in 1% OsO4 solution. The material was dehydrated in alcohols of increasing concentration and concluded in araldite. Morphological structures were contrasted in the process of dehydration of the material with saturated solution of uranyl acetate and analyzed by, and the sections with lead citrate. Sections with thickness of 40nm obtained ultratome UMTP-3, studied in the electron microscope TESLA BS-500.

When analysing the completion of the 3rd phase of wound healing process (phase of scarring) found that patients of the main group the healing of the wound with formation of a connective tissue scar was 18.6 ± 0.4 days after the surgery and in the control group 26.8 ±0.6 day (p<0.05).

In the evaluation of inflammatory reactions in 92.7% patients of the main group were found satisfactory or positive dynamics (table. 1).

Table 1. The results of cytological studies of the dynamics of the inflammatory wound response.

Evaluation of the results of the cytological study of the intensity reparations showed that patients of the main group in 97.1% of cases there was an active and satisfactory reparation (table. 2.)

Table 2. The results of cytological examination of the intensity of reparations

Table 3. The results of cytological studies of microbial contamination of the wound surface

The second advantage of the Dental gel is a broad spectrum of antimicrobial activity (S. aureus it was - 94,297,8%, E. coil - 8798%, P. Aeruginosa - 7692,5%). A wide spectrum of antimicrobial activity of the drug, its high and prolonged osmotic activity allow for 3-5 days to stop an acute purulent process and finish the treatment of uncomplicated purulent wounds of soft tissues. Antibacterial effect prevents the development of secondary infections (superinfection); protects granulation tissue from mechanical damage, has a moderate moisture-absorbing effect and stimulates the growth of granulation tissue. The timing of full recovery in patients treated with the Tooth gel of the BIONET Company was shorter than patients in the control group.

Thus, our results showed that the application of the Tooth gel of BIYOVIS Company vast majority of patients leads to a reduction of inflammation period of wound healing and earlier onset of reparative processes.
The simultaneous combination of the above qualities in one product is the basis for its use as in the first and in the second phase of wound process. This allows you to quickly eliminate acute purulent process; if necessary to prepare for the final stage of surgical treatment of wounds; significantly reduce the antibiotic therapy and length of stay of patients in hospital.