Air is the only thing without which people can't do even a short time.
However, many people think few about what and how they breathe.
According to various estimates, the inhaled air has at least half of us get contaminants. 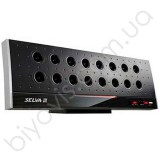 Designed for cleaning and ionization of air in premises 26-40 m2 or 80-120m3. There is a possibility of remote control, auto switching in accordance with the program regulation work intensity.

SELVA devices operate on the principle of silent discharge. First needle electrode creates ultraviolet light that reacts with the tubular electrode a titanium alloy. The result of this easy-catalytic reactions there are a large number of negative ions - ions (of 400,000 ions/cm3) and stable dose of ozone (about 0.003 mg/m3 of ozone in one ionization electrode). Regenerating the process produces high density anion and a stable dose of ozone that causes the activation and the regeneration air leads to the breakdown of harmful substances.
The instrument SELVA SM-316 is designed to clean indoor air 26-40 m2 or 80-120 m3, it has the possibility of remote control, automatic shut-off in accordance with the program regulation of the intensity of his work.
The instrument SELVA SM-103 is successfully used in small spaces (5-12 m2 or 15-36 m3) and in the car.

Ozonizers "Selva" uses the advanced technology of spraying ions and completely silent. As a result of working devices produced negative ions, giving the room a clean and fresh air. The devices do not require replacement of the filter, hence their cost-effectiveness for the user. To obtain high-density anions in the unit CM-3 103 are used and the ionization electrode, and the device SM-316 - 16 ionization electrodes.

Since the ozonator is capable of producing of 400,000 negative ions per cm3, the quality of the air is equal to the air in the forest or near the waterfall.

Ozone produced by air purifiers "SELVA" served strictly dosed in a concentration that is optimal for health, with the observance of maximum permissible concentration of ozone in the air. Generated ozone, which is converted to active oxygen destroys pollutants and removes odors. The ozonator is capable of producing approximately 0.009 mg/m3 ozone for the model SM-103 and 0.05 mg/m3 ozone for the model SM-316.
Confirmation of the favorable effects of ozone on the human body, especially suffering from diseases of the lungs, is the fact that a tuberculosis sanatorium always build in the pine forests. But ozone in the pine forest produced not only during thunderstorms, it is produced continuously from the resin of pine trees.

Electrostatic discharge generated between the negatively charged ionization electrode and positively charged dust cylinder, ensures the attraction of air pollutants to the cylinders. Therefore, it is necessary to periodically clean the vents.

The air must be ionized

In the book "Theory and practice of treatment with ionized air" by L. L. Vasiliev writes: "the Study of aeroionization from the hygienic point of view put forward the idea of the existence of the optimal, most favourable to health and being ion air mode, which should artificially create and maintain residential and business premises, along with optimal temperature, humidity, adequate ventilation, etc.".
At the sixth annual international healing conference promulgated a special result on the concentration of air ions according to the type of air connection between health and the number of anions in different intervals (1992/08, Hong Kong).