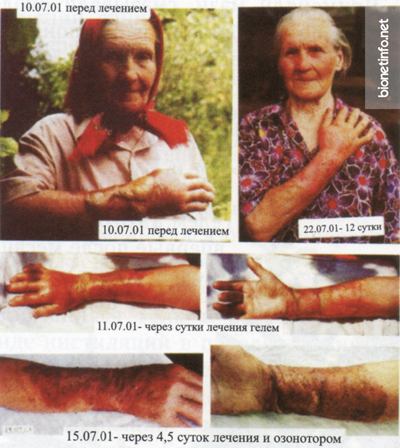 10.07.2001 year we were approached by a resident of the village of Antonovychi Chernihiv region with a thermal burn of the forearm II-III degree. Before three days she was treated with traditional methods, which only worsened the condition. On the inner side of the forearm bubble burst, there was a direct threat of infection. Hospitalization in the burn center, where the victim was directed by a local nurse, she flatly refused because of lack of funds for treatment, and also for the reason that nobody left to leave the farm for. We recommend every 3 hours to lubricate the place burn Tooth gel and hold the hand open (not applying bandage). It was dictated by the fact that it was very hot, 32 degrees in the shade, and we feared to aggravate the burn. 1

Through the night treatment with Gel fall swelling and redness of the skin, blisters settled. Only on the inner side of the forearm, where the bubble has burst, was leaking fluid. To exclude infection wounds, decided to use the Ozonator.

On the 5th day started to peel off the first dried crust. On the inner side of the forearm (see photo) are clearly visible areas of the III degree burns, where he may have formed scars. When the last crust dropped, we were invited to photograph the hand. On the burn was pink young skin without a single scar. And all this for 12 days at home!

Knocking over the pot of boiling water, the woman got burns II-III degree of the right hand and forearm. Hospitalization in the burn center refused due to lack of funds. Accidentally tore the bubble from a live meat. Appealed to the clinic, where put a bandage with emulsion of streptotsida. It is difficult to protect a wound from infection, and the burn beginning to fester.

We were asked by the neighbors of this woman for help, when her body temperature rose. Neighbors together collected money for the purchase of Dental gel. A few days later called a neighbor of the patient, she told them what had happened the recovery. As soon as began to lubricate the Gel, immediately dropped the temperature, purulent burn surface covered with a dry(!) peel, which on the fifth day began to flake off. After 14 days disappeared last crust... Photos were taken on 5th day of treatment Gel and 2 weeks after treatment. 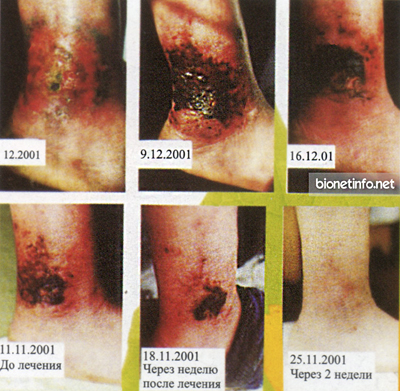 4.11.01 another woman appealed to us. In the beginning of august in the ankle she was bitten by a mosquito. Arose infection. By the nature of the activities the patient was forced to walk in rubber boots that are constantly rubbed the bite. The result is inflamed, the entire ankle joint, began an abscess. In September went to the hospital, where was made a surgical treatment. Better, but the wound did not heal. Paramedic clinic recommended to sprinkle the wound with streptocide. Instead of improving, there were formed a deep ulcer. Besides, the patient sprained the leg and got a sprain of the ankle joint. The leg is badly swollen.

Woman used ointment about 2 weeks. A sharp pain was gone, but the wounds festered. Appeared deep multiple ulcers. The patient could not only walk, but not to sleep. In this state, after 3 months of treatment, she turned to us for help. We recommended Tooth gel, Active balm and the Ozonator. She bought only Gel. After the first lubricating Gel, it was in the evening, the patient for the first time after a month of sleepless nights fell asleep and slept all night. After 2 weeks of treatment gel, realizing that the products BIONET helps, bought an Ozonator to quickly get rid of the wound. The course of treatment (within one week) we took pictures, again and again convinced in the power of action of the products of BIONET.

A woman of 85 years, diagnosed with hemorrhoids. She is suffering from this disease more than 45 years. Repeatedly appealed to the proctologist, used all kinds of candles, which gave only temporary improvement. The disease was accompanied by frequent bleeding. The proctologist said that in 70 years to do surgery too later, will have to live with hemorrhoids. Candles did not help, lived in terrible pain. Recently, the bleeding increased and the hemoglobin was critically low. 4-5 days could not go to the toilet, an enema could not be placed over nodes and bleeding. During the meal there came a spasm of the esophagus, resulting in lost a lot of weight. The patient was examined in the clinic, but the picture is not clear. We recommended treatment Dental gel. Coming next: Tooth gel stops bleeding, reduces inflammation, relieve that you need at this stage. After applying the gel the pain subsided, the bleeding has decreased. After 2 weeks the bleeding stopped. A month later atrophied external nodes. Spasms of the esophagus had ceased, the patient began to eat, gaining weight. The chair was normalized. In addition, 10 days of using vitamins BIONET — normalised hemoglobin. A year has passed. During this time there was no bleeding, although as it turned out, regulary gel used only in the acute period.