History of magnetic therapy goes back to ancient times. According to legend, a shepherd named Magnet, approximately 2,500 years ago, found piece of rock that attracted the carnations of his sandals. Today this breed is known to us as magnetic iron ore. 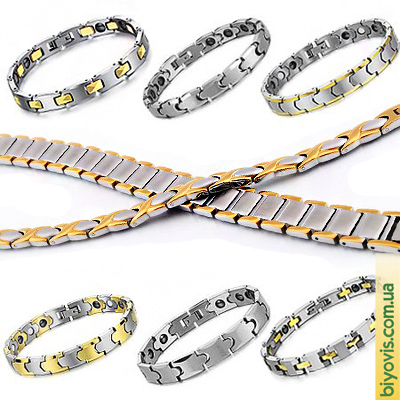 Magnetic therapy is nothing like the healing effect of magnetic fields on our body, which is confirmed by research. Last decade it was determined that our cells and organs are surrounded by biomagnetic sheath, which protects our body from the harmful effects of surrounding magnetic fields.
Since the lack of magnetic field shakes the body at its core, its consequences are multifaceted. Reducing and weakening resistance of the organism. While it is easier to fall ill, more prone to developing various chronic problems in the body.

Our body faster "wears out" and even its aging comes faster. It is therefore reasonable to treat the diseased cells with the help of magnetic therapy, so they strengthened again.
The healing power of magnets is to restore the disturbed magnetic field and maintaining its level of which is supported in the treatment process.
The magnetic field has a stimulating effect on blood circulation. Under its influence, is accelerating the assimilation of vital substances (vitamins, mineral substances, trace elements, proteins) and the simultaneous removal of harmful substances from the body.

The use of magnetic necklaces, acting on neural pathways and the flow of blood flowing to the brain, helps eliminate chronic headaches, improve brain functions, concentration of attention, decrease or even disappearance of impaired memory, improved vision, disappearance of fatigue, General malaise, fatigue, and dizziness due to low blood pressure. The magnetic necklace has a positive effect on eight of the twelve meridians and stimulates the whole body.
Wearing a magnetic bracelet on the wrist on one hand - could help solve the problems of low or high pressure. The arteries are close to the surface of the skin, so the effect of magnets on blood is more intense. The result is reduced pain at various points of the body, rigid muscles relax, accelerating the natural process of self-healing organism!

Our magnetic jewelry is made of stainless steel and titanium. Titan is today one of the most popular metal because it combines extreme hardness, and the combination of low density with resistance to corrosion and heat, allow it to be used not only in aviation and medicine but also increasingly in jewelry. This unusual metal is favorable for the skin and tissues, it doesn't stand out metal ions, therefore, these products can be worn and with allergies to other metals. Titanium, as a basis for the production of jewelry, only relatively recently appeared on the market.
Stainless steel has similar properties. Because it is resistant to corrosion and does not releases salts of Nickel, which are irritants of the skin, are suitable for use in medical applications, and therefore it is also called medical metal.

Our company offers only original high quality products, which has and original appearance becomes an indispensable accessory of true elegance. Covered with gilded decorations 18 carat gold with a thickness of three microns. Decorations have a magnetic field strength of 3000 Gauss.
In case of sleep disorders magnetic jewelry can be worn at night but after a six-month period of wearing it is recommended to take a break for one week. When using a magnetic necklace, jewelry must be removed at night. Magnetic therapy is an effective aid in maintaining health and improving our condition, however, does not replace the necessary medical care!
When drinking enough drinking water of good quality, as well as taking live food magnetic therapy effect is enhanced.