The biggest magnet is the planet on which we live - Earth.

Magnets are composed of millions of molecules are combined into groups called domains. Each domain behaves as a natural magnet, having North and South pole. And the strength of the magnetic field varies with the distance from the magnet, but it is always maximum at the poles of the magnet.

Magnetism maintains the equilibrium in the galaxy and galactic magnetism has an impact on life on Earth.

Over the past 500 years, the intensity of Earth's magnetic field has decreased by approximately 50%. The development of mobile technologies, radio and space communications, networks of personal computers leads to the fact that an increasing number of people are exposed to electromagnetic radiation. The result is a set of symptoms of the disease, which previously did not exist.

As observed, the organism that for a long time isolated from the magnetic field (eg. astronauts in space) passes through some biophysical changes.

The Director of the Tokyo clinic Dr Kyoichi Nakagawa described in the scientific journal the symptoms of the disease, which is called the syndrome of the absence of a magnetic field. Most often, this syndrome occurs in people who live in buildings of steel and concrete.

This syndrome is manifested in numbness of the shoulder girdle, pains in the back and head, insomnia, fibromyalgia, digestive problems and blood circulation, fatigue. And because of this phenomenon, Nakagawa did a statistical survey of 11,600 people who use magnetic necklaces, belts, rings, etc., and found that over 90% of them felt significant improvement with magnetic therapy.

Magnetic therapy used for a long time. This method of treatment of a disease evidenced by ancient Egyptian hieroglyphics and the cuneiform writing of the peoples of Mesopotamia. For example, the legendary Queen Cleopatra wore a small magnet to maintain its beauty.

One of these sources is the remarkable poem "On the nature of things" written by Titus Lucretius Carus in the first century BC. Survived the whole archives with the stories of diseases that were treated with magnet.

In 1976, the first international conference in Boston on issues of magnetic phenomena, and in 1991 was held the eighth conference in Germany, after which was published a book entitled "Clinical aspects of Biomagnetism". After the release of this book a method of treatment of magnetic therapy was used officially.

Modern research has shown that the Earth's magnetic field is a catalyst of metabolic processes in the body, it is necessary not disposable, such as tablets, but constantly such as food, water, air. If it is not in the environment, the organism dies, the shortage – hurts.

THE POLARITY OF THE MAGNETS AND THEIR ACTION

Magnets have two poles – North (negative) and South (positive). In magnetic therapy uses magnetic products which are unipolar and bipolar. Unipolar magnets are characterized by the presence of negative margins on one side (on the inner side of the product) and positive on the other. Bipolar – on each side there are two fields.

The North pole has anti-stress, anti-inflammatory, creates an alkaline environment, controls the correct operation of the organs, promotes deep sleep. A negative magnetic field improves the supply of body cells with oxygen. Products North polarity, have an analgesic effect and regulate blood circulation.

The South pole has a sedative and calming effect.

Both ways are important for the body and both polarities are present in the cells of the human body. Action of bipolar products are faster, but from time to time they should be removed to maintain the effectiveness of the action.

Mini–magnets create a weak magnetic field acting on deep muscle tissue, stimulating the natural organic processes. The pain goes away without drugs and without side effects. As with the use of medicines critical to the effectiveness of magnets is the dosage. Powerful electromagnetic fields, e.g. near high-voltage lines can cause disease, weak pulsating magnetic fields promote recovery. Science established fact: every nerve impulse in our body is transmitted via weak electric currents generated by the cells in the human body. Each of the 70 billions cells of our body contains electro-polarized particles (ions) that responds to these currents. These processes are very important for supplying the cells with oxygen and energy. In case of physical injuries and illnesses in these weak electric currents possible violations. Pulsating magnetic fields correct similar violations within cells.

The magnetic field acts on the body at the molecular, subcellular, cellular, tissue level and at the level of the whole organism.

Under the influence of a magnetic field, attaches great importance to the restructuring of the orientation of liquid crystals constituting the basis of membrane and cellular structures.

Under magnetic field, erythrocytes are extruded in the form of an oval, becoming more passable in the bloodstream. At the tissue level the effect of magnetic treatment is achieved by improvement of microcirculation (blood circulation in small blood vessels) and increase the permeability of membranes within range, increase the speed of biochemical reactions and metabolism, regeneration (restoration) of damaged tissue, stimulation of neuro-muscular processes, reducing edema.

Under the influence of magnetic fields of low intensity decreases the tone of cerebral vessels, improving blood flow to the brain, normalize blood pressure.

Under the influence of magnetic fields enhanced the function of the adrenal glands, thyroid gland, sexual glands. Magnetotherapy has a positive effect in the treatment of injuries (cuts, torn ligaments), tennis elbow, joint disease, rheumatism.

The effect of magnetic fields on the nervous system is based on the stimulation of inhibitory processes. This explains occurrence of sedative effect and favorable action of the magnetic field on sleep and emotional stress (especially at constant stress). The magnetic field causes an analgesic effect that is useful for a wide range of diseases. 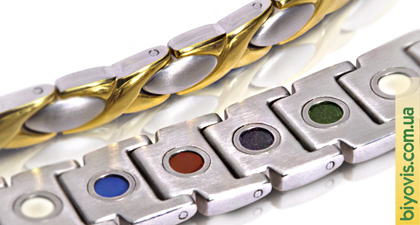 The main places for the application of magnetic products - neck and wrist. The use of magnets in these zones, enhances their therapeutic effect. Feature wrist and neck due to the fact that in their region are the major blood vessels, which can affect the entire circulatory system.

Wearing magnetic bracelets on wrist, offering a solution to one important problem – high or low blood pressure. Reduces pain in different parts of the body, relieves muscle tension and accelerates the natural self-healing processes of the body.

Magnetic necklace is exposed for 8 of the 12 meridians. They are useful for those who suffer from pain in the region of the shoulder girdle and migraines, so improve blood flow to the head.

As a result of researches it is established that the statistical effect of the magnetic field in the range of 500-2000 Gauss, leads to a positive therapeutic effect on the human body.

For chronic diseases to achieve good health and balance is recommended daily application.

Jewelry the North polarity are allowed to wear within 24 hours, but every 6 months it must be removed for one week. Bipolar jewelry wearable during the day, and at night they must be removed due to the fact that they give the body great amounts of energy.

Magnetic jewelry should not be worn when swimming in pools (chlorinated water) and in sea (salt), because it may damage the gold coating. Magnetic jewelry is not recommended to wear for pregnant women and people with implanted pacemakers.

Two thousand years ago the tension of magnetic field of the Earth was twice more than today. The process of its decline continues, so we need to think about how this loss compensate.

For the life and health a person needs a balance of negative and positive magnetic fields in the body. The use of magnets helps to maintain health and full energy of life.

Magnetic jewelry are optional and does not replace proper monitoring and treatment.

Drinking enough drinking water of good quality, as well as eating healthy food significantly enhances the beneficial effects of a magnet on the human body.

Magnetic jewelry "MAGNETIC+" is the united power of the five elements.

The composition of magnetic jewelry, in addition to the magnetic inserts is additionally introduced 4 of the active element. The location of these items are marked in different colors on the ornaments.

The composition of magnetic jewelry includes a unique combination of elements that produce a unique effect.

The magnetic field strength of 2000 Gauss. Magnetic material – neodymium. Polarity: North (-). The thickness of the gold plating on jewelry is 3 microns, and is made of 24 carat gold.

Due to regular wearing of jewelry, we can make a major contribution to the optimization of its own body.

When infrared rays penetrate the skin, they come into contact with water molecules. By the generated resonance is the enhancement of micro-vibration, which causes a thermal effect and the increase in tissue temperature. This, causes the dilation of blood vessels, irrespective of their size. With higher circulation of blood in the vessels is provided by the best work of the tissues of the body. The toxins in it can be easily removed and recovering a higher level of health of the cells.

preventing the occurrence of fatigue;
protection from electromagnetic radiation;
contributes to the quality night's rest;
improvement of emotional stability;
the overall strengthening of the immune system.

It is a metal that has a rare therapeutic properties. The interaction properties of germanium with the magnet aggravates their biological and therapeutic effects. Wearing Germany promotes:

normalize the elasticity and tone of blood vessels;
improved circulation;
reduce feelings of fatigue;
stimulation of oxygen;
the launch of the natural processes of self-healing of the body;
normalization of blood pressure;
improve the immune system of the body.

It is a precious stone known for its magical properties, namely:

beneficial effect on body and mind;
eliminates fears and anxieties;
helps focus and gives clarity to your mind;
contributes to the quality night's rest.