It's no secret that the state of people's health dramatically deteriorates. The reasons for this are several. The dominant can be considered a growing imbalance of ecological system, to compensate for which Mother Nature is no longer able. Urban population from infancy to drink poisoned water, breathe poisoned air, eat food only vaguely reminiscent of their natural counterparts. Antibiotic impregnated fabric is not capable to resist the penetration of infection, immunity reached a state that any  sneezing in the transport neighbor  may disable the protective functions of the organism.

The desire to protect people from simple extinction and mutations sensible doctors look for powerful natural ingredients that will help to cope with internal problems and external threats.

Thanks to the work of American scientists revealed how many important substances can supply humic acid for human, his immune system and General health.

According to many foreign researchers Humic acid is the missing link in our food chain. The formation of humic acids in nature is the interaction between organic and inorganic processes. It is suggested that these processes initiated the formation of organic life on Earth.

Drugs based on them contain the essential amino acids, trace elements, polysaccharides and vitamins. These high-molecular substances are embedded in the ion exchange and sorption processes in the body, broken caught in it salts of heavy metals and other toxic compounds. Forming a connection with the metal ions in the body, humic acid creates a natural barrier to the harmful effects and make the skin and mucous membranes are particularly susceptible to reaction with components of the environment necessary to maintain health.

Together with the therapeutic effect revealed powerful anti-aging effect of drugs with humic acids. Contained antioxidant complexes, minerals in combination with sulfur and selenium neutralize the harmful effects of free radicals on the length and mobility of telomeres on the ends of chromosomes, which leads to gradual dying of the body. Introduced in the composition of biologically active additives humic acid, the use of which confirmed many cases of cure of serious diseases, helps to turn these seemingly irreversible processes, back.

The new product of BIONET (Biyovis) Company is a Huminiqum, which is based on humic and folic acid, minerals, amino acids, macro and microelements. 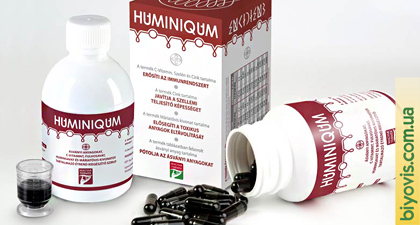 Humic acid is a transporter of vitamins and minerals directly into the cells of our body. The nutrients received by your body, enter into a synergistic response with plant minerals, resulting cells get more energy. It helps in better physical shape of the body, endurance, improve mental clarity and concentration, resistance to colds and flu, reduced body acidity, strengthen the immune system.

One of the most sought after benefits of humic acids are their powerful detoxification properties. They absorb toxins, heavy metals such as lead, cadmium and mercury, viruses, byproducts and more, and then remove them from the body.

Humic acids show high antiviral activity. A molecule of humic acid enveloped virus-like "coat", blocking his entrance to the cage and preventing reproduction. While humic acid sends a signal to alert the immune system about the appearance of the invader. It pushes the immune system to fight the virus that is in a vulnerable position as a result of binding of humic acid molecule. In the end, the amount of virus is reduced, and the immune system better cope with the disease. Inhibitory effect of humic acids directed against an early stage of viral replication, therefore, prophylactic use of humic acids is possible, particularly during epidemics of influenza.

A POSITIVE EFFECT ON THE PROPERTIES OF BLOOD

Folic acid (vitamin B9) takes an active part in the processes of regulation of functions of blood, has a positive effect on bowel function and liver, supports the immune system, participates in redox processes in the body, promotes normal formation and functioning of white blood cells. It also regulates the establishment and maintenance of healthy new cells.

One of the most pronounced effects of humic acids is strengthening the overall immune response. Humic compounds regulate the quantity of glycoproteins in the body that affects the balance of T- and b-lymphocytes. In addition, they stimulate the synthesis of interleukin 1 and 2, the production of endogenous interferon, gamma-globulin, which leads to activation of the oppressed functions of the immune system. A number of medical studies show that humic acid is able to demonstrate anti-cancer properties, inhibiting tumor growth, and inhibiting action of viruses that can cause cancer.

Humic acids have anti-inflammatory action. They accelerate the healing of wounds and ulcer due to the strengthening of processes of proliferation of fibroblasts, activation of water, protein and fat metabolism. They also have an inhibitory effect on the synthesis of mediators of inflammation - prostaglandins. Local activation of tissue hyaluronidase, which speeds healing. Installed the inhibitory effect of humic acids on the proteolytic enzymes that damage the walls of blood vessels and skin.

Thanks to the ability to recognize and bind to substances in the body in excess, humic acid is formed and excreted outside of the body complexes with cholesterol and low-density lipoproteins, which makes them effective in the fight against atherosclerosis and its consequences.

Humic acids reduce the sensitization of the organism to allergies, actively linking and removing allergens. The symptoms of allergies disappear, normalizing the number of eosinophils in the blood, achieving a stable remission.

Humic acid regulates the effects of stress hormones, which are produced by the adrenal glands (epinephrine, norepinephrine). Elevated levels of adrenaline and noradrenaline indicates elevated levels of anxiety. Humic acids are blocking excess of hormones and they do not reach their receptors in the cells. In addition, the ability of humic acids to affect the saturation of the red blood cells with oxygen, improves mood and causes a burst of energy.

HUMINIQUM can be purchased in capsules or in liquid form