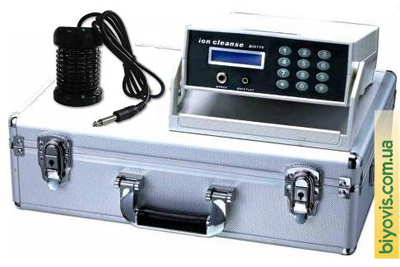 I would like to stay on the correct method of use of the device Detox SPA. Current top is ozone - that is, we have a water-ozonator - a device that produces by electrolysis gas ozone. The bubbles that we see is ozone, which is formed in a water environment. At a temperature of 35 degrees ozone immediately breaks down into pure oxygen and negative oxygen ions, we receive a large number of negative ions of oxygen, which by electrophoresis through sweat glands penetrate into the lymphatic system. Everything else, what we will say - will be just derived of this process.

Because the lymph in the field of sweat glands of the feet is well communicated with the lymphatic system, all the toxic products that come into contact with negative oxygen ions are oxidized, pass into the soluble form. That is the first part of the procedure is electrophoresis towards the body negative ions, and the second part is the elimination of these negative oxygen ions through the sweat glands of the feet. What do we get? We get those toxic products that can not neutralize or liver, or enzymes kidneys is various salts: the crystals of uric acid (urea), crystals of phosphoric acid, etc. - they are all connected in one mass.

We use for treatments only standard water, i.e. water with a salinity of 0.5 g/l. Thus, creating an effective osmolarity of water we achieve a stronger saturation salt solution, which is obtained as a result of the procedure. Summing up the experience, we can say that we get actually two of liquid: brown - predominantly liver diseases or black - disease of the gastrointestinal tract and the presence of heavy metals.

Exploring the water after treatment - we found in it the casts of salts, covered with a protein material, similar to flakes.

What is contained in this liquid? Between the particles of the fluid we found the concentration of urea - and as you know urea is the major end product of metabolism of proteins and it must be displayed by the kidneys. In the liquid, which we are using before the procedure, urea cannot be as we are pouring the distilled water with a mineralization of 0.5 g/l. That is when we began to investigate the concentration of urea in this liquid it was 0,170 - 0,380 milimol per liter, that is, 1/10, 1/15 a normal concentration of urea in plasma of human blood. If a person has level of urea in  2,3,4,5 times more than the norm of 15%, the urea will go into the liquid. And when you consider that we have 6-8 liters of fluid it turns out that in one session a man allocate through the sweat glands of the feet daily quantity of urea, which is a very good indicator.

The second, which we believe very important using Detox SPA is that it extracts a relatively small amount of glucose. That is, the excess glucose goes into the liquid and removed toxic low molecular weight polypeptides. Analgesic effect Detox SPA is because these connection cause joint pain and spasms of the vessels are removed through the sweat glands.
Over the past six months we had about 50 people using the Detox SPA  with good results that we have already in other structures. But I would like to pay attention to the correct use of Detox SPA. During some procedures, some patients somewhere in the 3-4-5 sessions occur skin rash. What is the reason? If these people have not established the metabolism in the gut, if there is a hidden worm infestation, hidden intestinal dysbiosis, we actually moving toxins from the intestine into the lymph and from the lymph into the subcutaneous tissue. Therefore, if such phenomena are observed, stop the Detox SPA and take a full course of Antiparasitic program for bowel and after that, you can continue the procedure.

Very effective was Detox SPA machine in bronchial asthma. The device was used during asthma attacks and to reducing blood pressure. It's two unique cases that you can easily repeat when the pressure is 180/130 - 30 minute Detox SPA + Lucab-Magnator and a pressure 60/100. That is, those mechanisms we have already spoken about allow to influence on the cause of high blood pressure. We get good results in bronchial asthma because removing allergenic and decreasing the level of of allergens in the blood.

And another area which we believe is a very useful - Detox SPA should always be applied after carrying out the water-salt purification. Why? We don't know exactly where we have problems with the gastrointestinal tract, we never know if we have Giardia, parasites. But even without a diagnosis it is advisable to use Detox SPA after a course of PUREX,  antiparasitic courses.
This device - nice way of helping people!